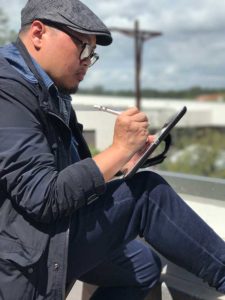 Rob Sketcherman is an artist and urban sketcher known for pioneering the use of an iPad, Apple Pencil and the app Procreate. Known for his use of dynamic line and vivid colors, he thrives on the immediacy of responding to sights, smells and sounds before him, capturing snippets of stories on the street as they unfold in situ.

Self-taught and and learning to draw from comic books in childhood, Rob spent years as a graphic designer and commercial illustrator before deciding to pursue drawing as a personal passion. He then got hooked on life drawing, which led him to discover a local Urban Sketchers chapter. Shortly after, Rob went completely digital at the beginning of 2014, in an effort to ‘reduce his accumulation of stuff’, and upon discovering the versatility and mobility of the iPad as a tool, has not looked back.

Rob’s work has also been exhibited in many urban sketcher shows both locally and abroad. His client list for artistic commissions include EY, KPMG, FENDI, HSBC and Bloomberg, and he has conducted speaking engagements and creative workshops around the world, including introducing iPad sketching in Apple Stores in the US, Singapore and Hong Kong. He has taught iPad urban sketching in many educational institutions, and been invited for several years by the Singaporean Ministry of Education to offer workshops teaching iPad urban sketching and creative digital workflows to the nation’s art teachers.

There’s so much detail to delight in, whether strolling around the corner from home or globetrotting on a bucket-list trip. Using bold lines and vivid colors, my work explores the alchemy of a specific time and space in my quest to spotlight, elevate and celebrate daily sights and scenes that most people no longer pay attention to.

I almost always have an iPad and Apple Pencil with me so that I can respond instantly when inspiration strikes. The heightened sense of awareness when working immediately on location is the elixir that connects me deeply to what is happening around me, and the vitality of what I’m experiencing is what I work to capture.

The series in this exhibition are some of my favorites when immersing myself in the streets of Hong Kong. My work evokes a flash of recognition, a pang of nostalgia, and hopefully, a nudge to pause, look up and question what you value in the space you live in.

Back to top of page